According to the IPCC report, the global uptake of CO₂ in cement-bound building materials offsets about half of the raw material-related process emissions of current cement production. The data basis for this quantification of CO₂ uptake are studies that use the model from an article² published in "Nature Geoscience" in November 2016. In this article, it is estimated that 43 % of the CO₂ process emissions (i.e. from the calcination of the limestone) of cement production worldwide in the years 1930 to 2013 were bound by the carbonation of concrete and mortar in the same period.

For good reason the IPCC considers a global CO₂ balance for a dedicated period of time in the past. Some assumptions have to be made in order to estimate what proportion of the carbon dioxide emitted during current cement production is theoretically bound by carbonation. Examples of this are:

The maximum absorption of CO₂ in the hardened cement paste depends, among other things, on the proportion of cement clinker in the cement. In "Nature Geoscience", the clinker fraction was estimated at 75 to 97 % (statistically distributed). The average clinker factor of cements today is lower (e.g. 72 % worldwide in 2020).

In the "Nature Geoscience" calculations, it was assumed that 30 % of cement production were used in thin-layer mortar or plaster applications, with a rather high carbonation rate. As Fig. 1 from reference 2) shows, with this assumption, mortars or plasters account for more than 60 % of the carbon absorbed. Other authors, such as Andersson et al.³, estimate this mortar share to be too large for current considerations.

Like Xi et al., Andersson et al. chose an approach according to which the CO₂ uptake of cement-bound building materials in a country or region is compared with the CO₂ emissions from cement production in the same period. Three different levels with varying degrees of accuracy are proposed.

Tier 3 determines the annual CO₂ uptake of the existing building stock using extensive knowledge of the historical use of cement in its various applications.

Tier 2 has a lower accuracy and can be applied if data on cement and concrete use are only available for a few years. For cases where neither the data basis for calculations according to Tier 3 nor according to Tier 2 is available, a simplified procedure (Tier 1) is proposed.

In Tier 1, the annual CO₂ uptake of a country's cement-bound building materials in the use phase can be estimated at 20 % of the CO₂ process emissions from calcination in the respective year. The annual CO₂ uptake at the end of life (i.e. during and after building demolition) in this Tier is 2 % and the uptake in secondary use is 1%. Overall, 23 % of the annual CO₂ process emissions of cement production are thus bound by carbonation. The above percentages were determined via the evaluation of seven published studies that fulfil the requirements according to Tier 3 or Tier 2.

In References 2 and 3 the CO₂ absorption of the entire building stock of a geographical region was estimated. For life cycle assessments, the question of how much CO₂ individual concrete components can absorb as a function of time is of huge interest. Annex BB of EN 16757⁴ gives information that can be used to estimate the CO₂ absorption of cement-bound building materials. For the use phase of concrete elements, a detailed calculation method is provided which allows to estimate the progress of the carbonation front and the corresponding CO₂ uptake with time, based on the concrete strength, the exposure conditions and cement constituents or concrete additions used.

According to the EN 16757, the CO₂ uptake in kg/m² concrete surface during t years can be calculated as

In this formula, Utcc is the maximum theoretical uptake in kg CO₂/kg cement. For Portland cement (CEM I), the value of Utcc is given as 0,49 kg CO₂/kg cement. C is the cement content in kg/m³ of concrete. k is a factor describing the carbonation rate [mm/year ⁰'⁵] and Dc the degree of carbonation [%]. For both k and Dc, values are provided in the standard.

With this formula, e.g. the CO₂ uptake of a civil engineering structure (concrete strength class C40/50, 400 kg CEM I per m³) with surfaces exposed to rain is calculated as 1,8 kg/m² over a service life of 100 years.

For concrete exposed to a dry indoor air climate and covered with paint or wall paper (concrete strength class C25/30, 280 kg CEM I per m³), the CO₂ uptake is calculated as 2,5 kg/m² over a service life of 100 years.

Moreover, Annex BB of EN 16757 addresses the carbonation potential after the use phase: The CO₂ uptake during the „end of life“ (i.e. demolition, crushing and stockpiling) phase of concrete largely depends on the waste handling and the storage of the crushed concrete. Whether crushed concrete is landfilled or whether it is recycled and replaces primary material may also have a decisive effect on the carbonation potential. Estimates are provided in the standard on the potential carbonation during these life cycle stages. 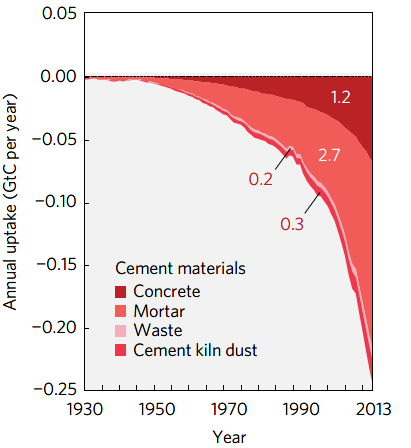 ³ Andersson et al. – Carbonation as a method to improve climate perfor-mance for cement based material, Cement and Concrete Research 124 (2019)